Locker Room Report: Joe Haden and the defense ready to turn the page

Relaxed and confident, Joe Haden met with reporters on Friday after practice, as his Cleveland Browns put the finishing touches on their preparations for Sunday's game against the Tennessee Titans.

During the bye week evaluations, the coaching staff took an inverted look at things and studied themselves. Which play calls and schemes are working? And which are not? Haden said the Browns completely eliminated some of the calls where big plays were given up.

This self-analysis couldn't have come at a better time for the Browns.

"It's been very, very helpful," said Haden of the time away and the corrections the staff has made. "It's not like we are that bad off, we've just got to start making plays, like myself, I've got to pick up my play. And everyone feels there's been two, three, four plays that if we made, our defense would look so much better."

And on the flipside, coach Mike Pettine has appreciated the tone Haden has been setting in practice. Other players have been feeding off of Haden's contagious energy.

"I mean he comes out, Joe is Joe," said Pettine. "He's the same, has got a smile on his face, hopping around, high energy. He practices hard. He's not pressing. It's not like, 'Hey, I have to be different so I'm going to press.' He goes full in practice all the time. It's a great example for our younger guys. How he practices, it's a great example to set."

Video: Safety talks about his strong start to the season

Haden gave his stamp of approval for Titans receivers Kendall Wright and Nate Washington. The former is someone who gives it his all on every play, while the latter has consistently proven he can be a force on every down.

So far this season, statistically and on film, it's actually been tight end Delanie Walker scaring most opposing defenses. Walker spent the first seven seasons of his career as a reserve behind Vernon Davis in San Francisco.

After years of waiting his turn the 30-year-old has blossomed into one of the more lethal weapons in the NFL. He leads all tight ends with 317 yards, also ranking him fourth in the AFC. Walker isn't exactly tall (6-foot) but his 248-pound frame combined with his powerful strides make him capable of breaking loose behind secondaries.

"Delanie Walker, he's a special player. He's going to be the focal point of their offense, being able to make plays," Haden said. "It's super, super hard to cover these dudes. Because you've got big, tall tight ends and they can just put their body in front of you. They box you out, like basketball. You have to be able to play low, play through their hands."

The Browns flight takes off Saturday afternoon. Haden can't wait to get settled in at the team hotel in Nashville.

"We're just ready to get back out there now," said Haden. "We've had a long time to study our mistakes and just basically figure out that we can be a special defense – when we do play well."

Photos: The Browns' top quotes this week about the Titans

Quote That | Browns vs. Titans

preparations for Sunday's game against 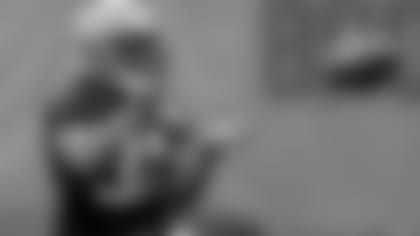