The Cleveland Browns selected Florida State offensive lineman Cameron Erving with the 19th pick, their second of two, in Thursday's first round of the NFL Draft.

The Browns picked Washington defensive lineman Danny Shelton at No. 12, as the Browns injected more than 650 pounds onto their roster on Day 1 of the three-day event.

"I just take great pride in being called an offensive lineman," Erving said. "And it feels great to be able to go in, and I've looked up to Joe Thomas for three years, since I've started playing offensive lineman, that who I've looked up to, that's who I would watch film on and you know Alex Mack is a great player as well and it's going to be a great experience to play alongside those guys."

Erving is considered to be one of the most versatile offensive linemen in this year's draft class, capable of playing multiple spots including center. Browns general manager Ray Farmer said Erving's versatility was one of the main reasons why the Browns made him the fourth offensive lineman selected in the first round.

Erving began his career at Florida State as a redshirt defensive tackle but converted to offensive line during his sophomore season. He quickly emerged as one of the ACC's top left tackles, as he held down the starting spot for three seasons, the middle of which ending with a BCS national championship. He shifted to center for the final five games of his senior season and played well enough to earn all-conference honors at both positions.

"I try not to pay attention to what's in the media and what they say, at the end of the day it's a football game, you go out and execute to the best of your ability and the rest will come."

Browns general manager Ray Farmer said Erving had "some of the best feet in the draft, period," and praised him for his length and speed.

"Our competitive advantage right now offensively is our ability to dictate pace because of our offensive line," Farmer said. "So bolstering that group really was the impetus behind the pick."

Erving joins an offensive line that returns all five of its primary starters from 2014. Browns coach Mike Pettine said it was uncertain where Erving would begin his career in Cleveland but indicated the left side and center were likely out of the mix. Erving could compete with right guard John Greco, right tackle Mitchell Schwartz and tackle Michael Bowie, who sat out 2014 with a shoulder injury, for playing time.

Erving said the specifics of where he'll begin his Browns career have yet to be discussed.

"We'll talk about that when the time comes," Erving said. "Whatever they need me to do, I'm willing to do it." 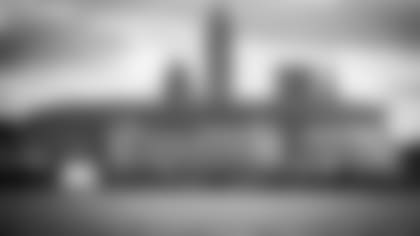 Dates are set for 2021 NFL Draft in Cleveland

Mark your calendar for the final week of April

2020 Draft Analysis: Browns 'trust the board,' fill key spots on both sides of the ball

Cleveland adds its 1st WR of the 2020 NFL Draft

Cleveland goes back to offense to start Day 3

Cleveland adds its 2nd defensive player of the night

Browns trade back in 3rd round, acquire 2021 3rd-round pick from Saints

Cleveland moves back for the 2nd time on Day 2

Browns trade back in 2nd round, acquire 5th-round pick from Colts